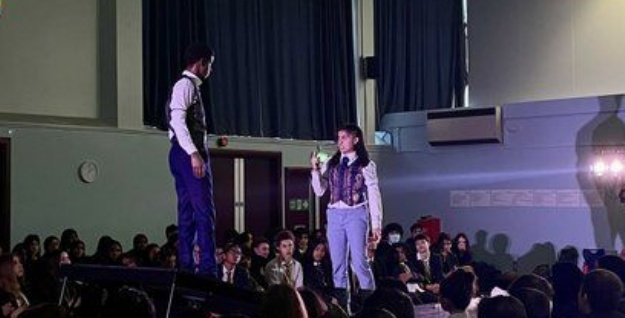 We have been delighted to have the opportunity to host ‘Box Clever’ Theatre Company in our Drama Suite this term.

Box Clever have been preparing for their national tour of Romeo and Juliet. Our Year 10 English learners have benefited from watching live rehearsals and engaging in interactive workshops with the actors. The piece will be shown in full on Friday 20th in the school Hall with a further two performances for parents and learners in Year 9/10 later in the term.

Artistic Director, Michael Wicherek has developed an hour-long performance with three outstanding performers where Romeo, Juliet and their consciences played by a third performer, captures the energy, passion and immediacy of the text.

Production Manager, Pip Thurlow has shared technical tips for both lighting and sound design with our ever-increasing number of production elements learners keen to develop their skills and knowledge.

Meanwhile, Year 11 GCSE Drama learners have completed the first 40% of their final examination with some beautifully crafted performances based on the experiences of displaced citizens arriving in the UK. Sonny Lemar Fraser designed a superbly thought-provoking set based upon newspaper headlines and government propaganda.

"If the students are icebergs the company have been melting the tip of their shyness in the workshop. All learners have revealed great insight and empathy. I have greatly enjoyed the quiet modesty from this gloriously diverse school. It has been a joy to see that not one teacher has had to intervene in a professional atmosphere that is conducive to learning."

"Year 10 were very lucky to participated in the Romeo and Juliet drama workshops organised by the Drama department and 'Box Clever'. They got to a real feel for what it would be like to perform live on stage! They practised acting scenes and making decisions on how to perform key moments and characters in the play."

"The drama workshop was amazing today! The Year 10s had so much fun and were very engaged. I cannot wait to read the bits they got to watch; I know they’ll understand it so much better now! Cannot sing their praises enough! Can we do this for every text we teach?"